The Vein Chronicles is my first paranormal series. Paranormal romance was always my first love so I’m kind of living my dream by introducing Fatal Harmony & Deathless to my book family. I had somuch fun writing a strong female character who is snarky, sarcastic, and a little bad ass. I want to be Isla when I grow up. I wouldn’t even mind the fangs, especially when  eternal youth is thrown in. Plus, she’s got some totally hunky men fighting over her in her undeath. I’m planning on giving Isla a lot of books and also writing for the characters introduced along the way. So be prepared for a long and dark ride 😉 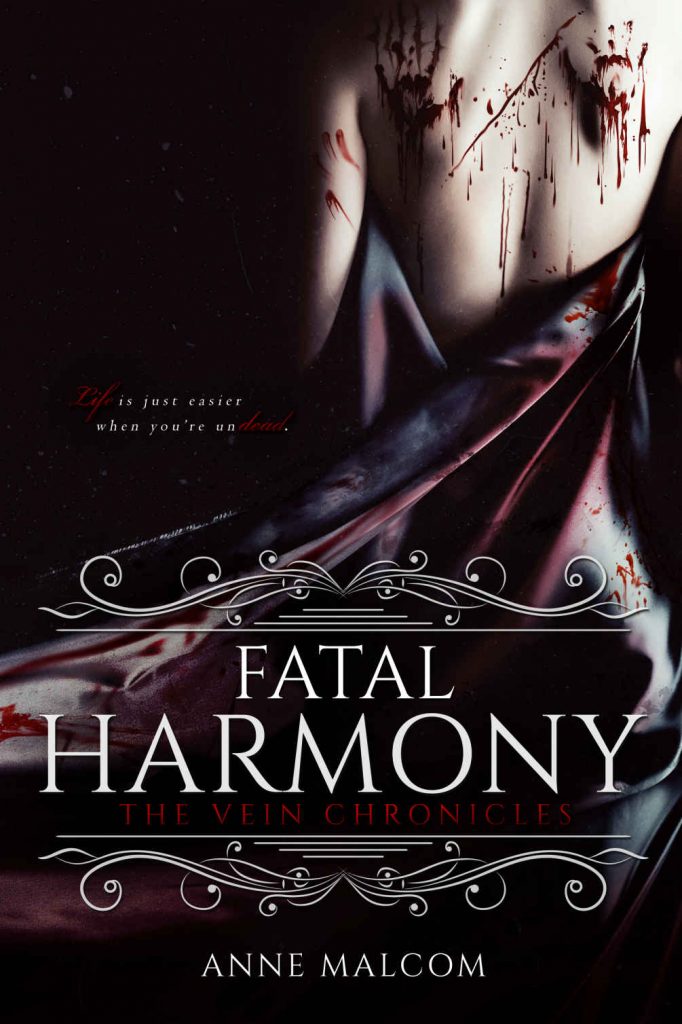 Fatal Harmony is the first book in the series, a warning, this one comes with a cliffhanger. Don’t fret too much, Deathless is ready and waiting for you on the other side…

I may be the villain of the story, but at least I get a leading role.
Evil is a term thrown around history and literature as if it’s something so easily definable. A concept to fight against.
Evil doesn’t exist.
Neither does ‘good.’
Vampires do, though.
I just happen to be one.
I’ve cruised through the centuries managing to avoid all the wars, supernatural and human, but still going to all the best parties.
I would say I avoided bloodshed, but it’s kind of part of the whole ‘vampire’ thing.
I’ve lived on the fringes of a society that considered cruelty and sadism favorable character traits for almost five hundred years. Now I’m in the middle of a war that might just put my nonbeating heart in a lot of danger.
Battles, I can handle.
The impossible attraction between me and the vampire slayer, not to mention the penetrating gaze of the king of our race, on the other hand?
I might not get out undead.

FREE on KU! Get it on Amazon. 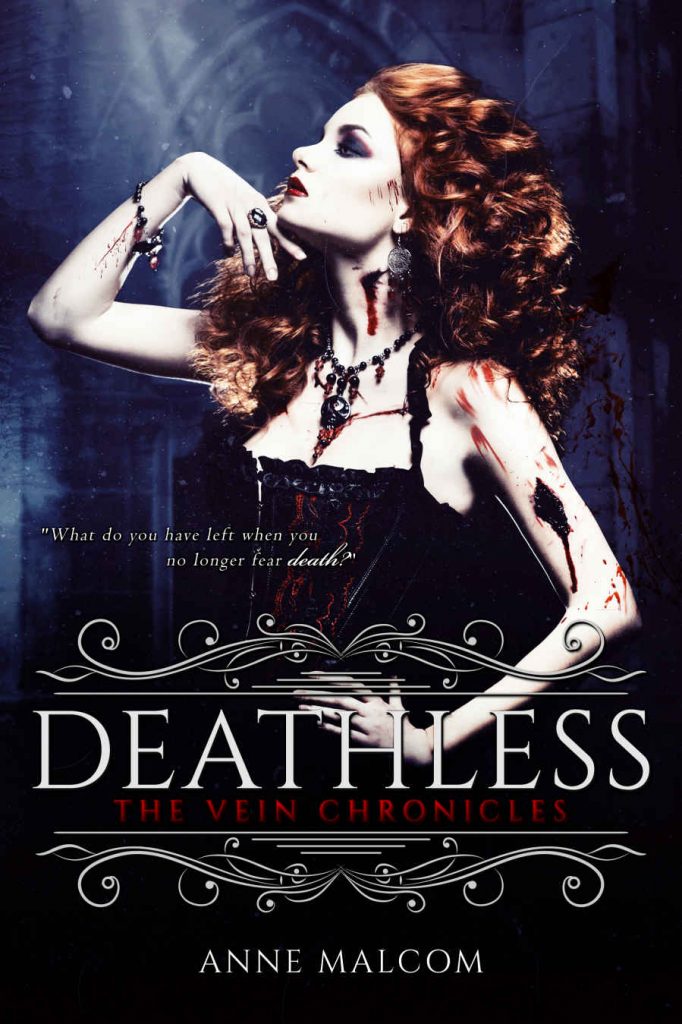 Picking up right were we left off, Isla is back with more sarcasm, snark, and a lot more blood. This one is going to leave you hanging too, because I’m cruel like Isla. I promise it’s worth it…

My life was never black and white.
Heck, it wasn’t even black, white and gray.
Lines were not drawn between good and evil, and if they were, I would have jumped those suckers for fun.
But now it was simpler. It wasn’t black and white. Or gray. It was only one thing.
Blood.
A crimson-tinted world. That was all I needed.
All I wanted.
Him.
Despite the war raging around us, or the secrets between us, there was nothing simpler than blood.
It didn’t matter that it would be fatal.
After all, it’s the things we’re not undead without that will kill us in the end.

Want to sink your teeth into it? Get it on Amazon. 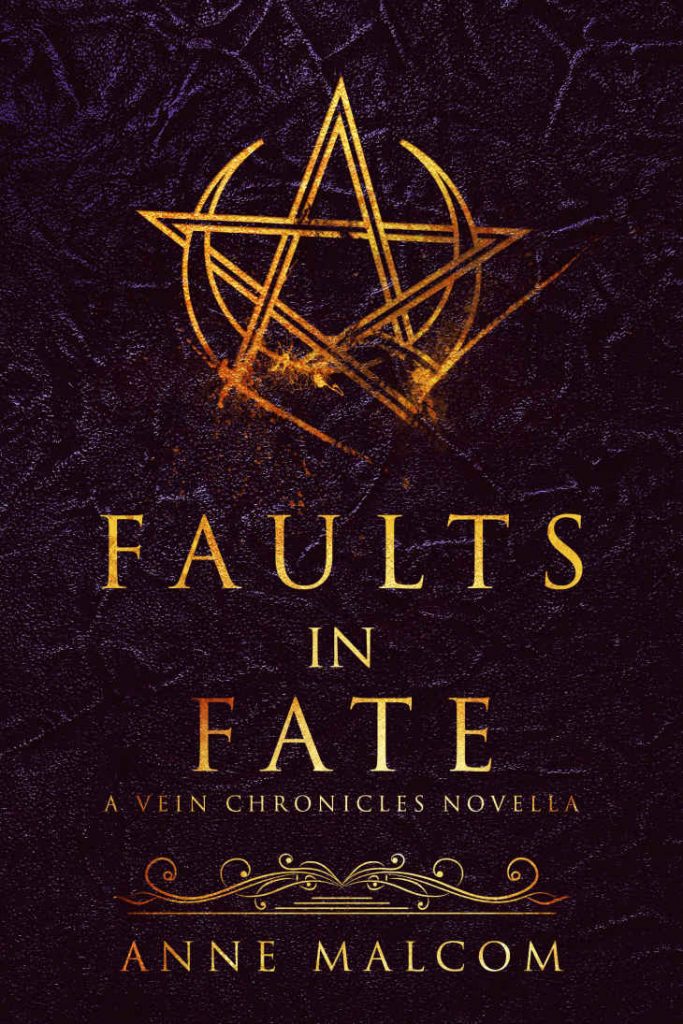 Faults in Fate is a novella introducing Sophie’s story to the world. This is only a taster, you’re going to get a full length book about her and her wolf after Eternity’s Awakening(Vein Chronicles #3). I highly recommend you read Fatal Harmony and Deathless before diving into this one. It’s going to be right up your alley if you like witches and werewolves…

Fate was a fickle mistress.
She gave Sophie immortality, magic, and a great tolerance for whiskey.
She also made sure Sophie tasted death, made sure it clung to her bones, sank into her marrow.
She gave Sophie power that came from death and brought death with it.
Her own.
And everyone she knew and loved.
If she didn’t learn to control it, that was.
She had been meaning to pencil it in, but the apocalypse had been licking at her combat boots and she got busy.
But she was kicking magical butt, because she was awesome.
Then the witch discovered the one thing she couldn’t handle, the one thing that would offer complete destruction.
A wolf.
Her wolf.
Broken. Dangerous. Wild.
His life tangled up in hers, without a choice from either of them. A fault in fate, bringing two broken, wild, and dangerous immortals together.
Sophie quite literally screwed the pooch on this one. 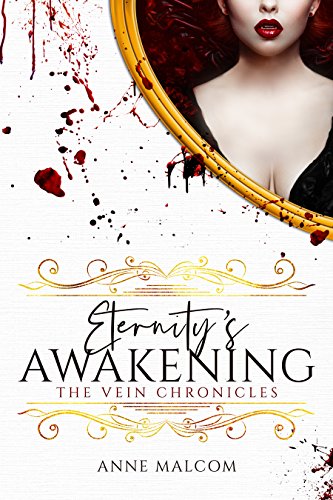 Isla and the gang are back. I’m warning you now, don’t get too attached to anyone, no one is safe.

Heartbeats had a pesky way of complicating things.
They almost always came with the nasty side effect of humanity and finally… death.
Since Thorne came into my life, I’d been plagued with both.
Heartbeats and humanity.
Both of these things were going to be the death of me.
One way or another.
And the death of everyone I knew and loved, a list growing longer with every beat of my newly repaired—and irritating—heart.
That pesky humanity was almost as toxic as the most debilitating illness on this hunk of rock, killing more humans than any vampire could.
Love.
And there I was, attached to a slayer who I couldn’t be undead without.
Friends who I was becoming increasingly attached to.
All things—people—he would take away from me.
Then he’d take me too.
But if it came to that, I’d yank out my beating heart and crush it in my hands before he could touch me.
It was lost anyway. If he won, my eternity would come to an end. As it happened, so would the world.
That only meant I couldn’t lose. 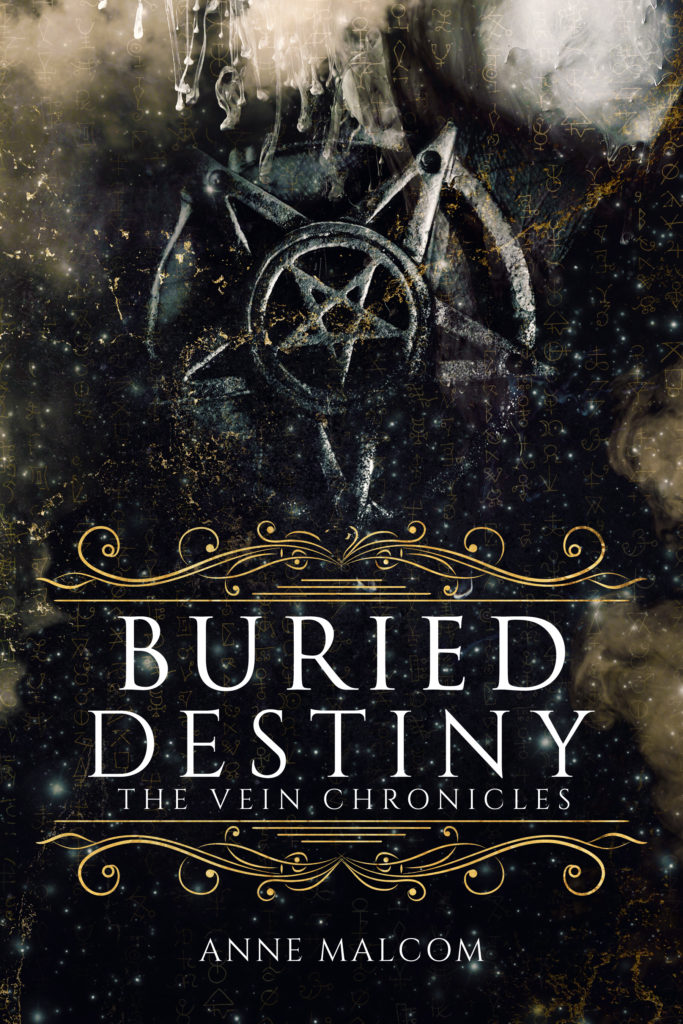 Sophie and her wolf have already been through a lot. We’ve followed them. To the grave. But the grave is not the end. Sophie will come back. But not like you know her. Not even really Sophie at all.

Death.
For everyone, even immortals, there is nothing after death. No takebacks, no comebacks. It’s a full stop. The end of a story. The end of everything.
For Sophie, it’s little more than a comma. A prelude. A footnote in her true destiny.
She was fated to die.
Many times.
To know what lay beneath in the underworld. To bring the darkness back with her.
It has been patient, that power that brought her back.
But now, it’s ready.
She is ready, for her true beginning.
For the end of everyone standing in her way.
Starting with a wolf she once loved.
A vampire she once treasured.
Destiny will wait for her no longer.